I arrived in Tokyo four days ago. It is my first visit since 2007 and I am happy to state that I love the city as much as ever! Time is flying and I have already crossed off quite a few items on my rather long list of places and stores that I wanted to see. However, there is still so much to do! Tomorrow CosmeTokyo trade show begins and at the end of next week I am going to Gifu province for a couple of days and a few days after that I’m off to Taipei; so every day counts!

Today I spent the day in Omotesando neighbourhood near Harajuku; one of the  centers of Tokyo’s famously shrill teen culture. Besides visiting the Ota Memorial Museum of Art (wonderful ukiyo-e [traditional Japanese wood block prints], a visit is highly recommended!), I wanted to check out Sincere Garden, a beauty salon which, according to Google/Google Translate, is one of the few Tokyo stockists of Japanese organic brand Quon. 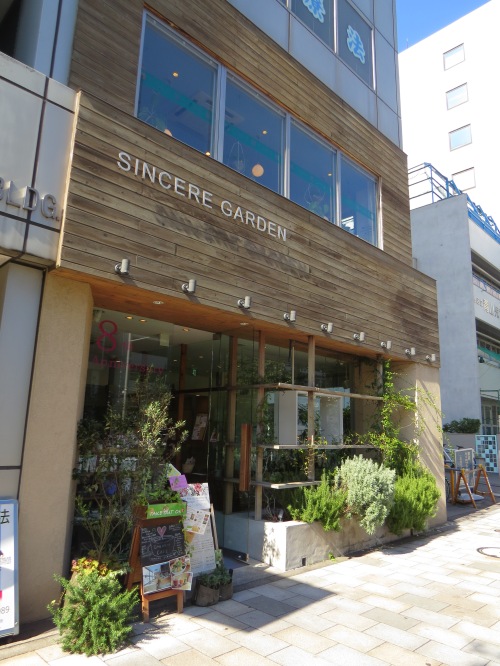 I had first come across Quon at this year’s Vivaness trade show in Nuremberg (check out my Vivaness 2014 report here). At the trade show I had been given some samples and I loved the products, so I was very keen to track down Quon in Tokyo. Hence my visit to Sincere Garden, located on Aoyama dori (3-5-4 Kita Aoyama, Takano Building 2F; they have a Google Maps entry) in Tokyo’s Minato ward. The closest subway station is Omotesando on the Ginza, Hanzomon and Chiyoda lines.

And Sincere Garden did have Quon cosmetics! It’s a charming salon and spa with a café on the second floor; amongst the beauty brands they stock is not just Quon but also Trilogy from Australia, Fleur de Fatima from Morocco, Japanese-French brand ShiGeTa, as well as Mama Butter, Medel and RinRen from Japan. The last three brands all belong to Bxe, the company which also operates the Sincere Garden salon.

I was immediately drawn to RinRen. There are two product ranges, Yuzu & Ginger and Rose & Tsubaki. I can never resist Yuzu, it’s one of my favourite citrus fruits! So I simply had to buy the shampoo. What I like about RinRen is that they strongly emphasize the regional heritage of the ingredients used in their products: the shampoos, conditioners and body washes are formulated with typically Japanese ingredients, like camellia from Nagasaki, uji tea from Kyoto, dong quai root from Hokkaido, ginger and yuzu from Kochi, aloe vera from Okinawa and so on. A convincing and very appealing brand concept.