Although I spent a lot of time in retail-oriented places, my stay in Tokyo wasn’t just about shopping and cosmetics! A few days before I flew to Taipei, I visited Tokyo Designers Week, an international design festival which started out in Tokyo in 1985 as a trade show for interior and product design. Over the years the event has expanded to take in fashion, music, anime, films, digital art….you name it, TDW has it.

Tokyo Designers Week in 2014 was bigger than ever. The event covered four central themes – design, art, fashion and music – and brought together an inspiring and very diverse range of art and design from all over the world. The structure of TDW was rather complex, with a dozen separate exhibition spaces, an arts and craft market and an extensive schedule of workshops, talks, events and performances. And there were so many innovative, imaginative, weird, spectacular and just plain beautiful artworks, exhibits and installations that my head was still buzzing the next day! 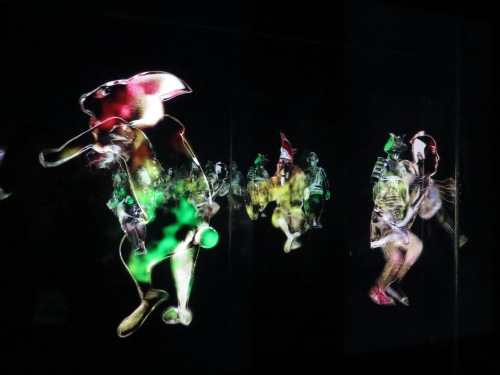 This year the organizers of TDW decided to expand the Tokyo event by connecting it with other international design festivals. The show went international, travelling to Milan (8th April to 13th April 2014) and to London (18th to 21st September 2014); with further international appearances scheduled for April 2015 (Milan), May 2015 (New York) and September 2015 (London). And there are exciting plans ahead for extending the cooperation with other design events – after all, there are some 60 official Design Weeks in the world, so there is plenty of scope. Berlin also has a Design Week, by the way – check out my article on the DMY design festival which was held as part of Berlin’s Design Week this summer.

However, let’s return to this year’s TDW show in Tokyo! The festival opened on 25th October and will run until 3rd November. The location is very central, near the city’s Meiji-Jingumae shrine – get off at Shinanomachi station (JR Chuo/Sobu line), Gaienmae station (Ginza subway line), Aoyama-Itchome (Ginza, Hanzomon and Oedo subway lines) or National Stadium on the Oedo line. The biggest exhibition area was the Creative Life Exhibition tent which featured ten separate exhibition sections. Here is a list of the Creative Life areas to give you an idea of the sheer range of design projects on offer: Designboom Mart (young international artist and design labels), Genius Expo Studio (where the big names in architecture and design are holding forth), Future Lab Tohoku (a creative space for designers and citizens of the Tohoku area of Japan to discuss/create new synergies) and Robot Exhibition (robots, androids, robot costumes, media art and undersea robots).

There was also the Super Material Exhibition (building materials and technological devices of the future), Super Renovation Exhibition (designs and projects to “renovate”/change/embellish living spaces), Architecture Model & Project Proposal (13 of Japan’s most famous architects presenting architectural projects) and Kimono (kimono-inspired/kimono-derived artworks celebrating Japan’s traditional kimono culture). One of the design labels present at Designboom Mart was One Day from Beijing. They make bags, wallets and laptop sleeves from unusual synthetic fabrics like Tyvek – you’ve probably seen it; when Tyvek is made into accessories it looks a little like paper, is pretty much indestructible and waterproof. I couldn’t resist and bought a gorgeous paper tote bag.

An interesting exhibitor in the Super Material section was Tokyo-based Neurowear with Mononome – an eye-shaped device equipped with sensors that can be attached to objects or furniture. The Mononome track the activities of the person in front of it, record these activities/impulses in an app and then “translates” them into visual emotions – for example, the Mononome might wink an eye or its pupil will turn heart-shaped. On their website the Neurowear designers outline some typical applications for this type of device – for example, a chair equipped with a Mononome could make coffee (or presumably, send an electronic signal to the coffee machine?) when the person on the chair is sitting in it for too long; a door would “notice” when the occupant has come in late at night and adjust the wake-up time accordingly; a pair of bathroom scales could send a “lonely” message if it hasn’t been used in a certain time period – that sort of thing. Basically a Monononome would be the interactive link between you and the inanimate objects around you. A very cool idea and slightly chilling at the same time.

Another exhibitor was Living Farm, also from Japan. The company manufactures LED powered hydroponic devices. Hydroponics are a type of hydro-culture (you can look it up on Wikipedia) – basically it’s soil-less agriculture; plants are grown in a mineral-rich nutrient solution and not in soil or dirt. Living Farm has a whole range of indoor hydroponic devices in different sizes – you can grow your own herbs, lettuce, spinach or even flowers; allowing you to experience the joy of doing a bit of gardening, cultivating and growing plants without the need for a balcony or garden. Considering how densely populated Japan is, and how overcrowded the cities are (little greenery and living space is at a premium), it is easy to understand how this concept would be popular over here. Whilst I can imagine many Europeans turning up their noses at the principle of hydroponic cultivation for enjoyment (“it’s SO artificial”), it is an ingenious and very obvious solution for overcrowded urban spaces.

What I especially like about TDW is the focus on young Asian design. Although there were several areas which featured the works of renowned Japanese and international designers, architects and artists (especially the Genius Expo and the Architecture Model & Project Proposal areas), there was also plenty of exhibition space dedicated to young and unknown artists.

A major aim of TDW is to bundle the emerging creative energy from Asia, building a platform for young designers/artists and creators. They are doing this with the Asia Awards program which took place for the first time in 2013. There were two Asia Awards sections at TDW this year. The outdoor Schools Exhibition featured the graduation projects of some 50 Japanese and international art and design colleges. The Schools Exhibition took place for the 13th time this year. And while the majority of exhibitors were Japanese there were also some overseas schools, including the renowned Esmod International from France and the UK’s London University of Arts. One of my favourites in the Schools exhibition was a project by the Department of Space and Architecture of the Shizuoka University of Art and Culture. The students had created a water drop painting installation – sort of a collaborative artwork (I love those!). A large glass covered table was lit from below; visitors were offered glasses of water to pour onto the surface and then draw designs into the water. A simple and very beautiful idea. And it was great fun, too!

The second section in the Asia Awards category was the Young Creator Exhibition tent which features the works of young artists from around the world, selected from hundreds of applicants by a panel of judges. And there were several very cool exhibits in this section indeed! Yu Matsuda presented “haku-muku”, silver balls made from tin foil compressed under high pressure – mundane materials transformed by creativity into works of art. Ryusuke Kido’s installation “Eternal Future” features lego building blocks made from incense – they do look like the real thing, just colourful lego blocks piled up in geometric shapes until you see the grey, lego-shaped blocks of ashes right next to them…! And Ryo Kishi’s ping pong ball installation “atOms/MoLECULE” – several little plastic balls vibrate and dance on air streams – plays with our perception of stability and frailty.

Besides the Creative Life Exhibition tent, the outdoor Schools Exhibition and the Young Creators space there were several other exhibition areas, including the TDW Art Fair tent, the Professional Exhibition, the Hokusai Manga Inspired Exhibition [note: Katsushika Hokusai (1760-1849) is one of the most famous Japanese ukiyo-e artists], the Genius Expo Dome, two container exhibitions and the Creema outdoor arts and crafts market. Creema is the premier Japanese online platforms for hand-made arts and crafts, similar to DaWanda or Etsy.

In the TDWA Art Fair tent I was charmed by the photo fold-out cards and booklets by artist Masuda Yutaka – he makes photo models, transforming 2D photos into 3D cut-outs – ingenious and very artistic. Check out his work online. Digital artist Toshiyuki Inoko’s stunning digital installation “Infinity of Dancing People on the Wayside” was in a curtained off cubicle in the Kimono exhibition area. Imagine a dark space, LCD screens all around you and digitized animals or animal/human hybrids (it was difficult to say), dancing and swaying in a multitude of different colours….it was mesmerising! And in the Hokusai Manga exhibition I particularly liked the “future fashion design” drawings by Japanese fashion designer Kosuke Tsumura.

This is just a short list of the exhibits and installations that I particularly liked; there was so much more to see but unfortunately I just had one day at the show. However, perhaps TDW will visit Berlin at some point over the next few years (organizers, please take note!) – or I’ll just have to return next year to attend Tokyo Designers Week 2015!