I was eager to see the stores of @cosme, a Japanese beauty chain with a retail concept that is strongly driven by social media network. The @cosme approach is an ingenious merger of online and offline retail.
[EDIT 30/01/2018: @cosme finally has an English-language version of the website! Check out: https://www.cosme.com/en; it’s just a part of @cosme’s huge Japanese language database but still, yay!
EDIT 24/01/2020: A couple of weeks ago @cosme opened a massive multi-storey outlet in Harajuku, opposite the Omotesando entrance of Harajuku JR station. This new store is stupendous – it makes all other @cosme outlets in Tokyo look boring and even dated; so if you’re in Harajuku or Omotesando area, do yourself a favour and visit it!]

@cosme is Japan’s largest cosmetics online store and it is also the country’s biggest virtual beauty community. The company’s websites are www.cosme.com and www.cosme.net so every Japanese Internet user who searches for anything to do with cosmetics ends up at @cosme sooner or later. @cosme’s main target group are consumers aged 16-25 which means that the website and its online community are hugely influential in the trend-driven teen and young adult consumer demographic in Japan.

@cosme’s very successful retail venture actually started with a simple review website: cosme.net was launched in 1999 and became popular very quickly. In 2001, the company behind @cosme (marketing agency iStyle), launched online store cosme.com. @cosme sells an extensive range of Japanese, Asian and Western mass market, masstige and premium brands. Whether you are looking for a Japanese face mask, a Korean eyelash lotion or Chanel’s latest whitening face serum, it is all available on @cosme. 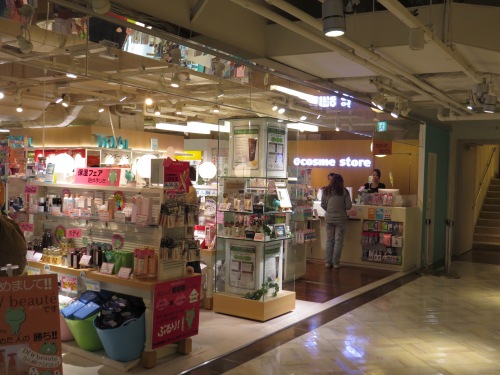 Consumer can purchase products on @cosme, review and recommend them, ask questions of the community, tweet about the favourite brands, post pictures of beauty products, share information and rate the products on the website. There are regular @cosme beauty awards: official rankings of the most popular beauty products in various categories – check out the excellent Japanese beauty blog Ratzillacosme which provides translations of the rankings for 2011-2014.

And a top @cosme ranking is a great endorsement for any beauty brand. I spent a lot of time in various beauty stores over the last week – small drugstores, large Matsumoto Kiyoshi outlets, independent perfumeries, you name it – and I notice “@cosme best-seller” stickers on beauty products everywhere.

In 2007 @cosme expanded into stationary retail and opened its first store in Tokyo’s Shinjuku area. Today there are five @cosme stores in the Tokyo area – in Ueno, Shinjuku, Shibuya, Yurakucho and Ikebukuro – as well as one outlet in Osaka. If you have visited Tokyo, you’ll know that Shinjuku, Shibuya and Ikebukuro are three of the busiest areas in central Tokyo; they are focal points for fashion, lifestyle, entertainment, shopping and leisure activities. And the respective JR (Japan Rail) stations are not only major intersections in Tokyo’s public transport system (millions of people pass through there every day), but they are also amongst Japan’s busiest railway stations. And that is saying something, believe me!

@cosme outlets are shop-in-shops located in department stores (three of @cosme Tokyo stores are in outlets of the Lumine chain, the other two are situated in Marui stores), which are usually in the direct vicinity of respective train station, or in some cases even attached to the station concourse. For my European readers: some of Tokyo’s train stations – especially Shinjuku and Shibuya – are so gigantic and confusing, with hundreds of exits, retail stores, malls and restaurants built right into the actual station, that there are station maps to help you find your way around. According to Shinjuku station’s Wikipedia entry, it made the Guiness Book of World Record as the world’s busiest transport hub in 2007.

Anyway, the @cosme retail stores are storefronts for the online shop: in @cosme you’ll find ranking shelves for various beauty categories – mascaras, fake eyelashes, skin care or beauty gadgets. Products are listed according to how popular they are on the website and/or how often they are tweeted/posted in the social networks frequented by @cosme’s online customers.

The stationary @cosme stores – I visited the flagship outlet in the Lumine Est department store in Shinjuku – sell a very wide range of mainstream mass market and premium cosmetics, there are colourful tester bars and loud music; it’s a teenage beauty shopper’s heaven.What I especially liked were the sinks where you can try out facial cleanser, foams and other liquid products – the store also provides tissues and paper towels.

The product line-up in the @cosme retail outlets changes constantly, depending on how popular brands or products are on the @cosme website. Each store also has at least one computer terminal: consumer can test products in-store and immediately review or recommend them online. Since I don’t read Japanese I can’t be sure about this, but I’m willing to bet that there are plenty of smartphone apps and all sorts of additional @cosme services to further boost the online/offline retail experience.

Cosmetics are proverbially difficult to sell online. Unless you know exactly what shade/brand you require or you have bought a specific product before, you need to test it in real life to see how the cream feels like on your skin, how pigmented an eye shadow is or what a fragrance actually smells like. The @cosme stores allow consumers to do exactly this and yet be completely immersed in the virtual @cosme beauty world at the same time. It’s an ingenious concept. And not just because of the infinite marketing and advertising possibilities that @cosme and its related services offer….!