Twice a year – in January and in June – Berlin is hosting the Fashion Week. And I actually got to attend three of the fashion shows thanks to the lovely people at Cosnova! Cosnova is the company behind two of Germany’s best-selling colour cosmetics brands, Essence and Catrice. For several years Catrice has been a sponsor of the Berliner Modesalon, a special Fashion Week showcase for young German design labels.

The brand’s makeup artists create the makeup look for each of the Modesalon fashion shows and the models are then made up with Catrice products. I attended three shows – Nobi Talai and René Storck on Tuesday and Marina Hoermanseder on Thursday. After the Hoermanseder show I had the chance to chat with Catrice’s chief makeup artist, Loni Baur. 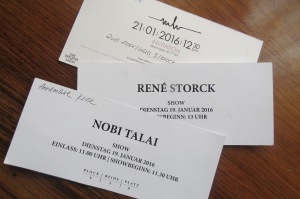 Each fashion show at the Modesalon had a very distinctive makeup design. And I had always wondered how these different looks are created; how the collaboration process between fashion designer and makeup artist actually works. So this is what I asked Loni.

She told me that she is first sent pictures from the collection that will be presented at the show – photos of individual clothes or accessories, sometimes swatches of fabric or a list of colours. This already provides some initial ideas: will the collection be futuristic or retro, with a 1920s or 1970s theme; will the designs feature a particular material – latex, leather, fur, silks – or any particular colour scheme?

Based on these visual inspirations Loni will create different makeup looks. The sketches are then presented to the fashion designer. This usually happens a few weeks before the  actual show. Colours and styles are discussed in more detail – should the makeup be subdued or glittery, girly or femme fatale; fake eyelashes or clear mascara?

The Hoermanseder collection, for example, had a distinctly 1950s vibe so Loni suggested strong black eyeliner – sort of flicked-up at the ends – which was paired with a feminine and light-hearted colour scheme; an emphasis on facial contours, clearly defined eyebrows and nude tones set off by pink-toned blusher.

The makeup look is then tried out on a model and the design is fine-tuned again until everyone is happy with the result. In the backstage area the makeup artists receive the looks sheet which specify which colours and products should be used, and they then make up the models accordingly.

The products that were used in the makeup for the Modesalon fashion shows are all from Catrice’s product range, by the way. The brand has just brought out its new limited edition, Graphic Grace – oranges and strong pinks, greys and beiges; an interesting combination. And beautiful packaging. See for yourself! 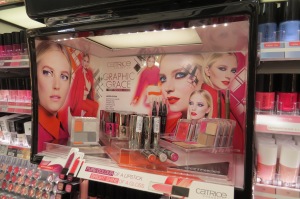 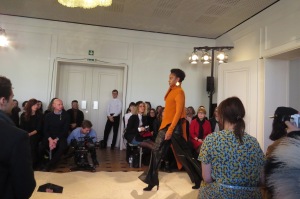