Whenever I visit Freiburg I fly to Zurich and take the train across the border into Germany. It is faster and usually cheaper than taking a direct train from Berlin to Freiburg (a tedious 6 1/2 hours; Freiburg doesn’t have an airport!). Also, I like Zurich! And I always book my trains and flights so I have at least one afternoon in the city.

This time I checked out the Jasper Morrison exhibit at the Museum für Gestaltung in Toni-Areal and Ian Cheng at Migros Museum für Gegenwartskunst in Löwenbräu-Areal), stocked up on my favourite espresso mixture at Café Noir (1 kilo of Parchement, freshly ground!) and, of course, visited Les Gourmandises de Miyuko to take a look at their latest patisserie collection!

This spring/summer 2016 collection is different: Sara has created a new anime character – Miyuko’s sister Kumiko and her favourite pet, the kraken Yoshi Tao! The two main cake creations were Kumiko’s Torte (a delicious combination of light sponge cake with sesame seeds, a zesty yuzu cream and accents of black beer) and Yoshi’s Torte (matcha sponge cake with a filling of pineapple cream). 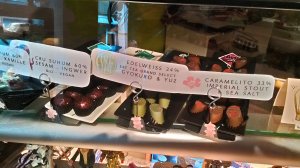 As always, the collection included several praline creations which reflected the key ingredients used in the cakes – I tried the Edelweiss 34% (gyokuro green tea & yuzu) and Caramelito 34%: Imperial Stour & sea salt – an intriguing and rather delicious combination! There were also two 60% dark chocolate pralines (sesame & ginger and pineapple & chamomile) and five matching bar chocolates. I wanted to buy the stout & sea salt chocolate but was in such a hurry to catch my flight that I forgot. What a pity! 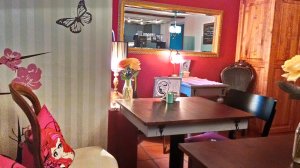 One response to “Another visit to Les Gourmandises de Miyuko”