I began writing this trade show review just after Vivaness 2020, the world’s biggest organic beauty trade show, had ended. That was in late February and just a few weeks before Corona arrived in Europe.

Then came the lockdown and cancelled travel plans and all the rest of it, and other things in my life took priority – like tidying up my collection of cooking spices, cleaning out various cupboards and watching a lot of 1980s and 1990s TV series on DVD.

However, now that things in Germany have started to inch towards a precarious kind of (new) normality I decided that it was high time to finish this article. Which I did. Yay me. So if you detect a certain patchiness to this text that’s why: parts of it were written pre-Corona, the rest post-Corona. Or PreC and PostC. February and Vivaness seem like a very long time ago. Anyway.

This year’s Vivaness took place from 12th to 15th February in Nuremberg, a pretty medium-sized historic city in the Frankonia region of Germany. Vivaness and its sister trade fair Biofach (the biggest organic food products expo in the world) are an annual fixture on the European organic industry trade fair circuit.

The first Biofach show took place back in 1990 so this expo’s been around for 30 years. In 1999 the trade fair moved to Nuremberg and in 2007 Biofach’s organic beauty section was spun off into a separate trade show, Vivaness. The two trade fairs always take place in February and, incidentally, pretty much always in rain and snow. February in Nuremberg can be cold! 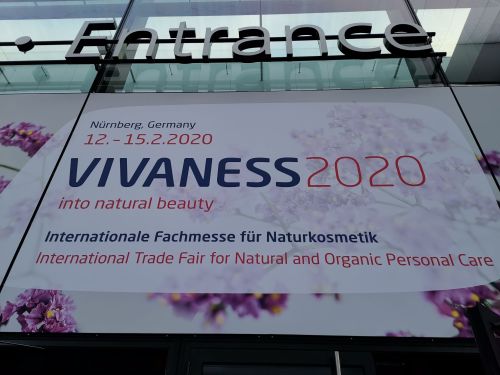 END_OF_DOCUMENT_TOKEN_TO_BE_REPLACED

Here is the latest translation for Best of Beautyjagd: News and Reviews from the World of Organic Beauty (Chapter 55) includes a special makeup edition of Julia’s Beauty Notes, an article about Reformhaus stores (a fascinating and unique retail channel; Reformhäuser are a a type of health food store that originated in Germany), a product review of the new Sunny Day SPF 15 cream from German brand cobicos and a beauty shopping guide to Liège. Enjoy.

Well, Vivaness 2018 has come and gone. The 11th edition of the trade fair took place from 14th to 17th February 2018 together with sister show Biofach, the biggest organic food trade show worldwide. I actually had to go through my old show reports to count how many times I’ve attended this trade show; 2018 was my fifth Vivaness visit.

This year’s trade fair seemed to feature more small and newcomer brands than previous years (especially in the newcomer Breeze exhibition area) which was fabulous – after all, this is one of the main reasons why I love visiting trade shows: new brand discoveries!

Which is also why this show review will focus on international niche and start-up brands (many of which you’ll recognize from my Instagram feed).  Also, with a few exceptions, these are all brands that I’ve never written about on trend-traveller, so this is quite exciting for me as well. I’ve grouped the brands by country, but in no particular order.

And now, click on the link below to read more about my favourite brand discoveries at Vivaness 2018!

END_OF_DOCUMENT_TOKEN_TO_BE_REPLACED

Has it been six years already? Wow. And this reminds me, Natural Cosmetics Conference also celebrated its 10th anniversary in 2017: Happy Birthday Naturkosmetikbranchenkongress!
This conference report will be a bit shorter than my usual articles because I am flying to Asia very soon (Tokyo, Taipei and Hong Kong for Cosmoprof Asia 2017!) and there is still much to do before I leave.

However, I will of course cover the most important lectures and panel discussions. Key topics this year included the challenges (and opportunities) of digitalisation for retailers and brands, how to market to the Millennials demographic and – particularly interesting – the organic beauty markets in East Asia!

END_OF_DOCUMENT_TOKEN_TO_BE_REPLACED

Check out the last three translations for Beautyjagd blog!

News and Reviews from the World of Organic Beauty (Chapter 44) offers an article on aromatherapy hacks for travelling, a review of US brand Ilia Beauty’s new Cucumber Water Stick, a comprehensive show report of Julia’s visit to ingredients trade fair In-Cosmetics Korea (one of my favourite articles in this installment. I’ve never visited any of the In-Cosmetics trade shows!) and all the usual organic beauty news and launches, including a special Beauty Notes edition from the Austrian city of Graz.

In News and Reviews from the World of Organic Beauty (Chapter 45) you’ll find a beautifully detailed organic beauty shopping guide to Los Angeles, a feature on how to heat-proof your makeup for tropical temperatures, a product review of German brand marie.w’s new Gloss Serum Gold, a DIY starter essence beauty recipe from 1941 (!) and two Beauty Notes articles (including a Berlin-Edition!).

And News and Reviews from the World of Organic Beauty (Chapter 46) features and article on aromatherapy scalp care, product reviews of Italian brand Tiama’s Organic Shower Balm Iris and the Eau de Parfum Cavi & Jardin de Figuier from French fragrance brand 100Bon, a Beauty Notes edition from the South of France and a fascinating look behind the scenes of the fair trade macadamia nut oil in German brand Dr. Hauschka’s liquid foundation.

I just realised that it’s been a while since I last posted Beautyjagd translations on my blog. So here they are: the most recent four chapters of Best of Beautyjagd in English – with more international organic beauty info than ever!

News and Reviews from the World of Organic Beauty (Chapter 40) includes reviews of Uk brand Nourish’s 3D Kale Cleanser and US brand RMS Beauty’s limited edition Pop and Mod Collections, a feature on the renaissance of the General Store retail format in Los Angeles and two very detailed Beauty Notes articles with all the latest launch info about organic beauty in Germany and internationally.

In News and Reviews from the World of Organic Beauty (Chapter 41) you can read a feature about five organic niche brands from the US, a detailed article about the OrganicCup menstrual cup, a special travel Beauty Notes edition from Kenya, and product reviews of the Skin Dew Coconut Cream from US brand One Love Organics, the new fragrance Two Eternities from UK brand Walden Natural Perfume and tattoo skin care from German beauty brand Eco Cosmetics.

Hi everyone! I just arrived in Seoul. Before I head out to visit Cosmobeauty Seoul 2017 trade show: here are the last three chapters of my translations for German organic cosmetics blog Beautyjagd.

In News and Reviews from the World of Organic Beauty (Chapter 37), Julia talks about minimalistic face care routines; there is a new addition to her article series about historical fragrance flacons, a very detailed show review of this year’s Vivaness trade show (with a focus on mainstream organics) and all the usual organic beauty launch info from Germany and around the world.

News and Reviews from the World of Organic Beauty (Chapter 38) includes  a feature about five new organic beauty brands from Austria, Julia’s niche beauty discoveries at Vivaness trade show, a review of US brand Axiology’s new lipsticks and an extra long version of the weekly Beauty Notes with all the latest organic beauty launches.

And News and Reviews from the World of Organic Beauty (Chapter 39) features an article about Julia’s visit to Annemarie Börlind spa in Bad Teinach, a presentation of four deodorant creams from German brand Vegane Pflege, an how-to article about the Korean 7 Skin Method of face care, reviews of U brand Ilia Beauty’s new Eyeshadow Palette and Primer, and a special Beauty Notes edition from Los Angeles.

This year the two trade fairs took place from 15th to 18th February 2017 in Nuremberg. According to organisers Messe Nürnberg, more than 50.000 visitors from 134 countries visited the two trade shows. There were 2,785 organic exhibitors  in total (259 of these brands/companies were at Vivaness) and this year’s Country of the Year was the host country, Germany.

As always, it was an exciting and exhausting four days! This was my fourth trade show (if you’re interested: here are the Vivaness 2014, Vivaness 2015 and Vivaness 2016 articles). And now, without further ado and in no particular order, here are my favourite brand discoveries at Vivaness 2017!

END_OF_DOCUMENT_TOKEN_TO_BE_REPLACED

Today’s the first day of Vivaness  trade show (yay!) so it’ll be a busy week for me. I’ll publish my official Vivaness review article in a couple of weeks; in the meantime, here are the last three Beautyjagd translations:

In News and Reviews from the World of Organic Beauty (Chapter 34), you can find an article on frangipani absolue, the annual Best of Organic Beauty 2016 review (Julia’s favourite 10 beauty products/brands from last year), a review of French beauty brand Couleur Caramel’s new limited edition “A Sunday in Deauville” and the usual Beauty Notes.

And the highlights of News and Reviews from the World of Organic Beauty (Chapter 36) – which was posted today! – include a company profile of French organic niche beauty brand Graine de Pastel and – my personal favourite! – Julia’s #1pack1day Mask Challenge: a Beautyjagd Theme Week with reviews of seven different face masks (including a peat mask from Finland, a hydrogel mask from Korea, a cream mask from Hawaii and a sleeping mask from France). Enjoy!

Before I forget: here are my last three Beautyjagd translations.

News and Reviews from the World of Organic Beauty (Chapter 32) includes a line-up of organic beauty gift set present ideas for Christmas, a Finnish edition of the weekly Beauty Notes (Julia travelled to Lapland in November!), a detailed review/comparison of five manual cleansing brushes and all the usual organic C&T launch info we have come to expect from Beautyjagd ; )

And News and Reviews from the World of Organic Beauty (Chapter 33) offers the second part of Julia’s Oil Library post (+ DIY oil recipes!), a Beauty Postcard article about the Loose Flora Foundation of Australian brand Zuui Organics, a Paris edition of the Beauty Notes, a detailed book review of Imelda Burke’s The Nature of Beauty, an article about Julia’s visit to the Paris pop-up store of French beauty subscription box company Nuoo Box and, of course, a special Christmas-themed Beauty Notes article.